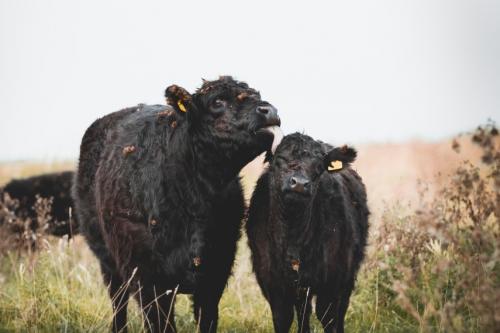 SEFARI scientists make a significant contribution to the Scottish Government’s BVD Eradication Scheme. We inform this scheme through our unique and multi-disciplinary approach that uses epidemiological, economic, social science and molecular science to explore the wide-ranging implications of BVD. We also communicate with farmers and their vets to help them identify, understand and eradicate this viral disease. Since 2010, this scheme has increased the number of Scottish breeding holdings with negative BVD status from 72% to 91%. This is estimated to save the Scottish Dairy industry £38 million per year and the public £11 million.

Bovine viral diarrhoea (BVD) is an endemic viral disease of cattle, which has significant economic and welfare implications for livestock farms. The key challenges of BVD relate to its hidden nature and the wide ranging health issues it causes. Infection of cattle with BVD can lead to reproductive, respiratory and gut disorders and, can make cattle more susceptible to other infections through its ability to suppress the immune system. The disease is spread by a small population of infected animals called persistently infected (PI) cattle. PI cattle contract the virus from their mothers as they develop in the uterus allowing them to build up a tolerance to the virus; they remain persistently infected and continue to spread the virus for the rest of their lives. Completely eradicating BVD is difficult: as the numbers of infected cattle decrease, the harder it is to identify remaining PI cattle.

The Scottish Government takes a strategic approach to encouraging animal health and welfare, and supports an ambitious industry-led scheme to eradicate BVD from Scotland. SEFARI works alongside EPIC, the Scottish Government-funded Centre of Expertise on Animal Disease Outbreaks, to support the development and delivery of this multi-phased BVD programme.

SEFARI research adopts a uniquely multi-disciplinary approach that includes an economic assessment of the cost of the disease to the livestock industry, epidemiological mapping of cattle movements, statistical modelling to optimise herd sampling strategies, and virus sequencing approaches to improve BVD sample identification and tracking.

Our modelling of the evolutionary and epidemiological dynamics of BVD has provided greater insights into how its genome sequence changes over time. This has informed the BVD eradication scheme by enabling more targeted approaches focused on more specific transmission routes. We have also developed a rapid method to characterise thousands of BVD isolates by sequencing part of the virus from blood samples. This analysis has led to the creation of a unique BVD biobank for Scotland; this repository contains vital data that will inform future disease surveillance and farm-level interventions.

We have also developed detailed economic and epidemiological models of BVD transmission and animal movement to allow us to show the extent of BVDV in Scotland. In these models, we compared the cost of direct and indirect actions by farmers to control disease spread against the benefits brought by reduced disease risk. The results provided a strong economic case for eradication efforts at the farm level. We have also used novel video techniques to understand the practices and decision-making of farmers about on-farm biosecurity and important practical, social and cultural considerations. The findings are being used to help farmers reduce the risk of BVD on their farms.

SEFARI scientists are delivering a substantial evidence base to underpin the Scottish Government BVD Eradication Scheme. Developing control and prevention strategies for animal diseases is a long term process and the benefits can take a long time to materialise. However, since 2010, this scheme has increased the number of Scottish breeding holdings with negative BVD status from 72% to 91%. This research is also delivering substantial economic returns for farmers and the public; our scientists have shown that actions at the farm level will save the Scottish Dairy industry £38 million in production costs per year and reduce prices for consumers by an extra £11 million through less waste. Future research will focus on further developing methods for targeting remaining sources of infection so the disease can be completely eradicated from Scotland.